About Prayer beads, Malas and Rosaries

This is the Boddhisatva Kuan Yin.

She is the Lady of Compassion.

Every stitch in this embroidered piece was done from Love. I believe that her story is so moving

that I had to remind myself that we all have suffering. The question is: how do you make a blessing from

something so horrible? The truth is: it is not so easy. But we all have inner strength. This is where a daily

prayer practice needs to come from. Your inner strength through prayer will come out. I am not saying

you must take up any form of Religion. I am speaking to the soul, here. Source is listening. Let your heart

speak, if nothing else to the spirit of the Universe.

Legend said that there was a King who had three daughters. One of them Miao-Shan was so lovely that at

her birth the Earth shook and flowers sprung up all over the land. True, the King and Queen were amazed and

the village people told them she was sure an Incarnated Holy One. Unfortunately, her parents were greedy

and were not very interested in her sacredness. Her Father at one point was going to force her to marry. Her only

interest was to help alleviate the suffering of others. Her father thought if she went to the monastery and was

treated poorly she would reconsider. Instead, she did what she was asked and tended to the garden: it flourished

and amazed everyone! It also continued to flourish through the winter and a spring of pure water also formed

next to the kitchen.

The father then heard of her miracles and decided he would kill her. Instead of this fate her Protectors came along

and carried her to an Island where she would pursue a life of meditation and solitude. After a time her father became

ill. A monk came to see him, he really wanted to live, so the monk told him the only way is if he ground up the eyes

and arms of one free from hatred. He told her father that there was a Boddhisatva ready to do that if asked.

Little did he know, that Boddisatva was his long lost daughter. She gladly did such as was asked of her. the monk

upon returning with this "medicine" told her father that he should go to thank the one who gave them to him, and he

The family of Miao-Shan went to see her, unbeknownst to them. They were shocked, when they knew it was her. She

said, "Mindful, of the love of my father, I gave up my arms and eyes for him." The family, was shamed, they felt such

sorrow and grief for what they had done to her. As they went to embrace her, clouds descended and she was taken into

the air and they gave her a thousand arms and eyes.

This is just one story of her and the suffering she endured.

Remember you too, can rise out of suffering and transform yourself. You will become so aware and full of love that you too

will feel as if you have a thousand eyes and arms!

This is the Kuan Yin that I embroidered. The background is a

larger example of the same piece. 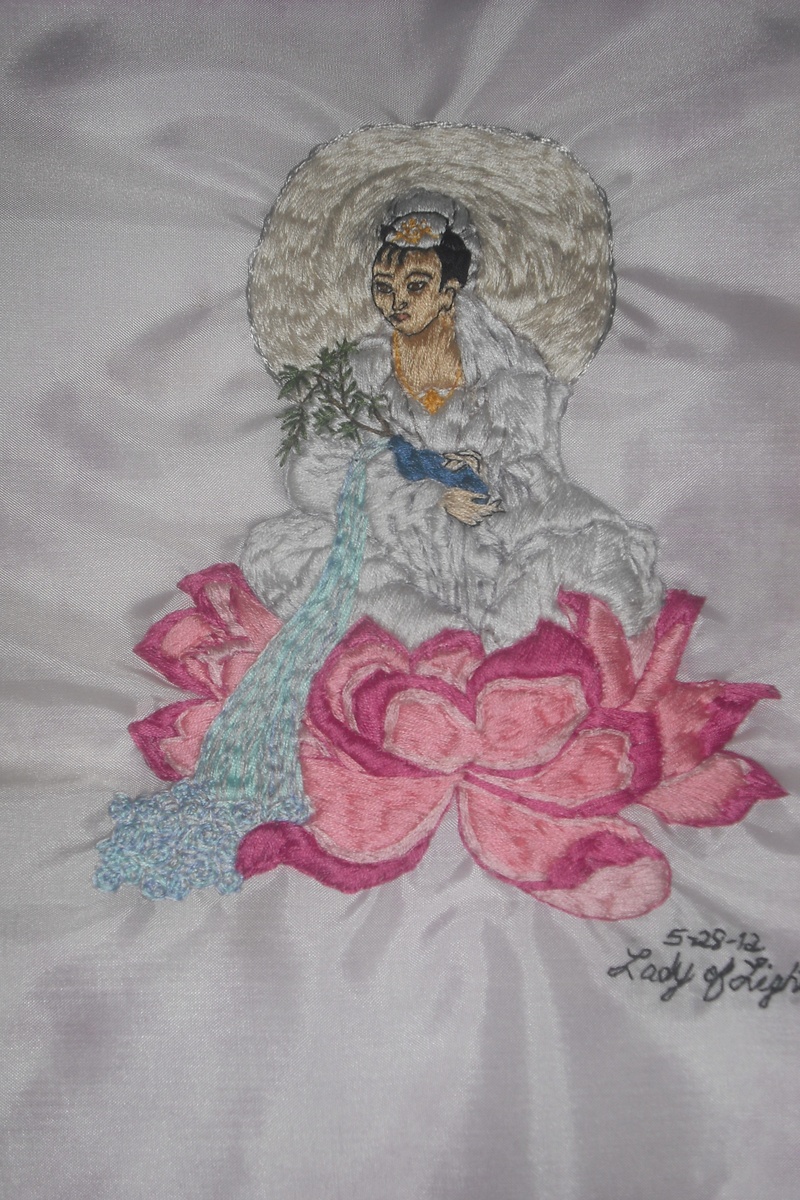 Inner Chi Crystal Jewelry not only makes jewelry for

malas, prayer beads and Catholic Rosaries. All of the

pieces are made from crystals and stones. There

is some base metal used, but silver can be found if

one wants a special crucifix or a special bead on

a mala. Glass spacers are sometimes used, and other

One can choose from the below rosaries or wrist malas

or half or whole malas. Or a person can have one custom

made and the stones of their choice may be used.

All of the pieces are prayed over and have had Reiki